Well, I didn't know how I would do this tournament in Lake Jackson for the Ladies Tour. I didn't practice from Jan 29 - Feb 18 due to a two week class for work (loved it! it was management/supervision, but really about leadership and supervision). Then the week I came home, I worked on getting a new car! I just love it. Seems too expensive for me, but I sure do enjoy driving it. I've always wanted a Nissan and an SUV and got both this time. A Nissan Murano: 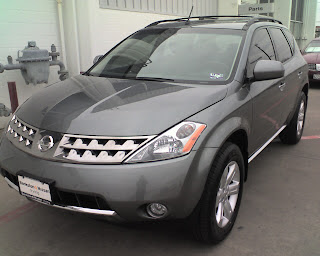 But, I did have a long practice session on Feb 19th. Federal Holiday, so I was able to take full advantage of Mondays Chicks Play Free at Rusty's Billiards. :) My friend Tara met me up there and after a couple of hours of hitting balls for myself, we sparred from 1 to 6pm. We played sets and she beat me 3 out of 4 sets (or something like that), but she was playing good and I was just doing okay. Someone got into my head and that affected me for a while - but glad it happened - good practice for tournaments.

This tournament I wanted to focus on my pre shot routine again - that seems to be really helping me of late, but I noticed I didn't do that too much this time. I did have 4 break and runs, though!

Because this is one of the tournaments I run, I wasn't sure how I would do. Last time was a good example of that, but I felt real good going into this tournament. I made it a point to hit some balls in the morning - usually I don't have time, but Julie (other board member and travel partner for this event) and I traded practice times while we signed people up in the morning.

I got a bye and then played Lisa Watson. I was playing well and won 7-3. I broke and ran the the last game of the match (that was pretty cool). I then had to play Helen Hayes. She has been playing well and she just beat Heather Lloyd. I asked Heather how she was playing and she said, "she's playing good. Make your outs and you will be fine." Well, that's exactly what I didn't do! I missed a tough 9 and maybe another one, but didn't get out a few racks. I could tell I really wanted to win, instead of focusing on the game. I lost 7-5.

I then went to the one-loss side and played Terry Petrosino first. She's always a tough competitor but she missed a 9-ball that would have made it 5-3, so that let me back into the game at 4-4 and I won 7-4. She was scratching on almost every game;I did let up a little bit and if she was playing better, I would have lost. I won 7-4.

I then played my dear friend Shayla. She came off a big win the last tournament (and will be playing in her first pro event in two weeks! Congrat's Shayla!), but she had a migraine and I knew she was feeling bad. I think I broke and ran the first or second rack. I knew it when I was doing it, but tried not to think of the scratch off we get for Break and Runs! LOL. I tried to focus on my pre-shot routine in the subsequent games, but I did mess up a few key shots late in the rack more than I wished.

I was feeling good at the beginning of the match and then my friend Monica came up to me and mentioned that my "other cleavage" (as she called it) was showing. I immediately told her it would affect my game because if I think about my clothes, I wont be thinking about pool - I know from experience. So, she felt bad for telling me (I should have just said, "oh, thanks!"), but I did let it bother me because I was embarrassed.  I pulled my under shirt down (the one I deliberately wore for that reason) before every shot. I really was SO dang embarrassed! I tried to not let it bother me, but I really felt bad for my 'crack' showing. Everyone was making fun of me, which is fine because it is funny, but I was really embarrassed [I'm looking for a nickname, but "The Plumber" is not the one I'm going for]. I won 7-4 and Shayla congratulated me and said I didn't make a lot of mistakes, but I didn't feel that way. With this win, though, I lasted until Sunday!

I played Tasha Salandanan first Sunday morning. Although I won 7-1, I have to say, she is playing GOOD! It's the best I've ever seen her play. I was playing good and got some rolls, so the score doesn't reflect it, but she is someone we all need to watch out for. I complimented her after the match and I hope she took it sincerely. 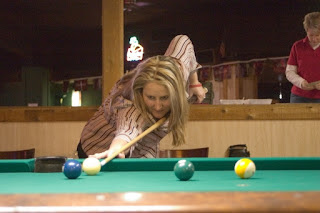 I then had to play my friend Jennifer. She broke and ran the first rack. Scratch card for Jennifer! Then I broke and came up dry on the break and she ran that rack. I told her as I was racking that she was playing good. Then I chatted a little about the music (I wished it was her music playing, not this other guy's music). I shouldn't have been so talkative.  She missed a couple of shots in the next game and I won. When I had a chance to get to the table, I played really good (at least I felt like I did), even though I missed two 9balls. I won 7-6 and felt great about the match. I think I had a break and run in that match, also, but I'm not sure. The last game, at 6-6, I played a safe and scratched! I got back to the table and felt good about my run until I got straight in on the 7-ball. I had to draw back (I guess I could have gone forward and played the 8 in the side as Tara said), but I felt comfortable with my draw on these tables (and have been working on them) and so I bared down and drew it back for good shape on the 8, then the 9! :)

I then had to play my sparring partner Tara. Ugh, what a match! I won the first two games because she messed up. She won the next two games because I messed up. Then we said, "okay, let's play well." I messed up again. Ugh. She went to the bathroom and I think she was up 5-2 and I told myself to focus. I did end up focusing, and ran out from her dry break. The she won a game after kicking at an 8-ball. Then I ran out after her dry break again. On the last game, she kicked in the 3ball (by accident) and rant out for the win 4-7. Gosh, if I was just playing a little bit better... who knows! I should feel good about 5th place out of 42 [check out the brackets]. I am happy overall, I really am, but I just wish a few games I would have played better.

I'm currently getting ready for the BCA State Championships in Corpus Christi. I've been reading about 8ball in Phil Capelle's books and feel REAL good. Tony won it in 2002. I want to win it in 2007. We are going to spar this weekend. I plan to finish Play Your Best 8-ball and then read the 8ball section of Play Your Best Pool (my FAVORITE way to get ready for an 8-ball tournament) before I leave next Wed. :)

Tonight I am going to play in an 8 ball tournament and possibly Monday, too, to get ready. In league on Tuesday I went 3 out of 5. :(

Until Next Time.
Posted by Melinda at 6:07 PM