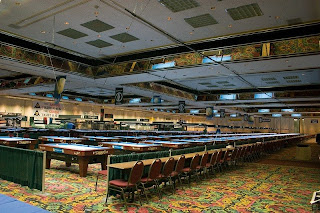 Damn I love this photo! Tables, tables, everywhere!
Photo by Adam Zayas
To keep with the theme of describing my tournaments, with this event I feel:
Splendid.
Last year my scotch doubles partner (Royce Bunnell, one of the owner's of OB Cues) and I placed 5th out of 404 teams. I didn't think we could repeat this year, but Royce ensures I'm laughing and having fun (and that is so key for me), and we do play well together because we both know the intricate aspects of the game of 8-ball. So I gave it another chance with him this year. To my surprise, we did well again!

On Friday May 9th, We played and won at:

Then we lost hill-hill at 10pm. It may not seem like a lot of matches, but IT WAS! It made for a VERY long day, but we had another great tournament already! At this point, we were guaranteed 9th place.

On the one-loss side, the races went from 4 to 3. Ugh. We played our next scotch doubles match Monday afternoon and won 3-2. There is a lot of waiting around on Monday and Tuesday due to players still climbing through the brackets in their singles divisions. So, we waited around Monday evening and were told to come back at 9am Tuesday.

We show up, but the guy on our opposing team is still in the singles. So, I got up early for nothing! Ugh. The guy finally was knocked out of his singles division at 3pm and we finally get to play. We were now playing for 7th place. They moved us to the front tables, where all the other 'big time' matches from the other divisions were occurring. Lots of people were watching and I walked to our table, as I made my way through the crowd, and not once looked around. It is so key for me to not look at the crowd.

I felt confident and comfortable (which was comforting in itself) and grabbed some balls to practice with. I still wasn't looking around, and comfortably hit some balls as my partner made me laugh and smile. Oh, he's wonderful and knows how to make me feel calm!

We played really good and beat them 3-1 I think. Then we had to play my good friend Tracie and her partner (Don Owen), who happened to be my partner's business parter of OB Cues! It went hill-hill and we came out on top of the score, doing so with a rack and run! We ran out so beautifully! So, we are now playing for 4th; one better than last year, and out of 414 teams! 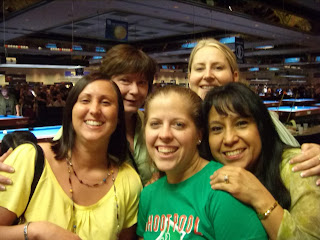 In between my scotch doubles final matches, my friends: Amanda, Kathy, Marissa, Me and Monica.
We were up 2-1 in a race to three and although a foul on the 8ball by the opposing team could win us the match, we did not have a ref watch the hit. We ended up losing 2-3 on a tough out.

Still, GREAT tournament and it felt good to have fun (oh, and to not fall on my face too much, lol).

Singles was a repeat of last year (if you don't know what happened last year, let me just say now that to repeat what happened was last year is simply an embarrassment, lol!). As a previous Master player, but now playing in the Open division, I again went out in two. TWO. Did I really? Damn, I know 8ball so well, but it's my shot making that got me. I had some really, really impressive runs but a few missed positions on the 8ball and lack of focusing on the shot at hand cost me both matches. I definitely wasn't playing my best, but I still enjoyed the matches, loved that I did not let the mental game affect my pool playing, and the matches were memorable, which is nice for me. Of the mental game, I really was proud of myself of not getting embarrassed, not thinking about who was watching (judging me) and just playing P O O L. I wonder if those ginko pills are what is helping me? lol. Or is it the Pleasures of Small Motions? hmmm...

I then played in the women's team division. We have a great team - we all mesh so well together and I enjoy this team because there is no drama. Drama-free; makes for a great team that focuses on P O O L. :)

At this point, we were playing for the hotseat on Saturday and so most of us had to change our flights. OMG - it was WELL WORTH IT!!! :)

We lost that winner's bracket match but we were determined and rallied rather impressively in our next match so we could play in the finals. We started out VERY strong in the finals, but I think we started to get tired and a few rolls their way showed it was their time to win. 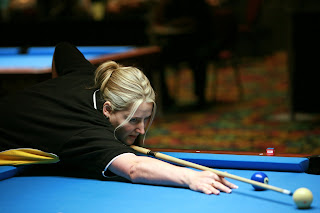 Me, in the finals of the Women's Team event.
Photo by Ashi Fachler
I was ELATED we placed second! The team played so well together and we all brought a lot of strengths to the team. I played well on Wed and Sat, but Thu and Fri were nightmares for me. I just wasn't pulling my weight, but felt I wasn't playing bad, just not getting "W's" for the team. I did hang my head a few times, but tried to remain upbeat for my team mates and just struggled through the rolls and messy tables. But, luckily it's a TEAM event. hehe. :) I am so proud of ourselves and so happy and excited, STILL! We placed 2nd!! 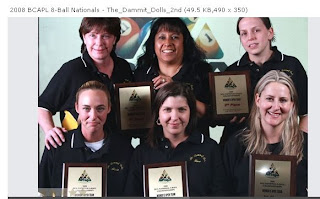 The Dammit Dolls: Kathy, Monica, Tara, Alicia, Tracie and Me
Vegas is always fun and full of lasting memories; this year was no different. I got to hang around great friends and enjoy many great team experiences and also met some new friends. Last year was difficult to top off, but with the success in team and scotch, last year just might have been topped!

One of these years I hope to do well in the singles again (LOL), and that means working on my position skills. Isn't pool great with all the learning experiences and growth experiences?!

Congratulations to the dammit dolls!! I had no idea--I was sorry to miss Vegas this year, but I appreciate the recounting of your experience on the blog and the pictures. That's a beautiful one of you at the table, Melinda! And congrats on scotch doubles too!